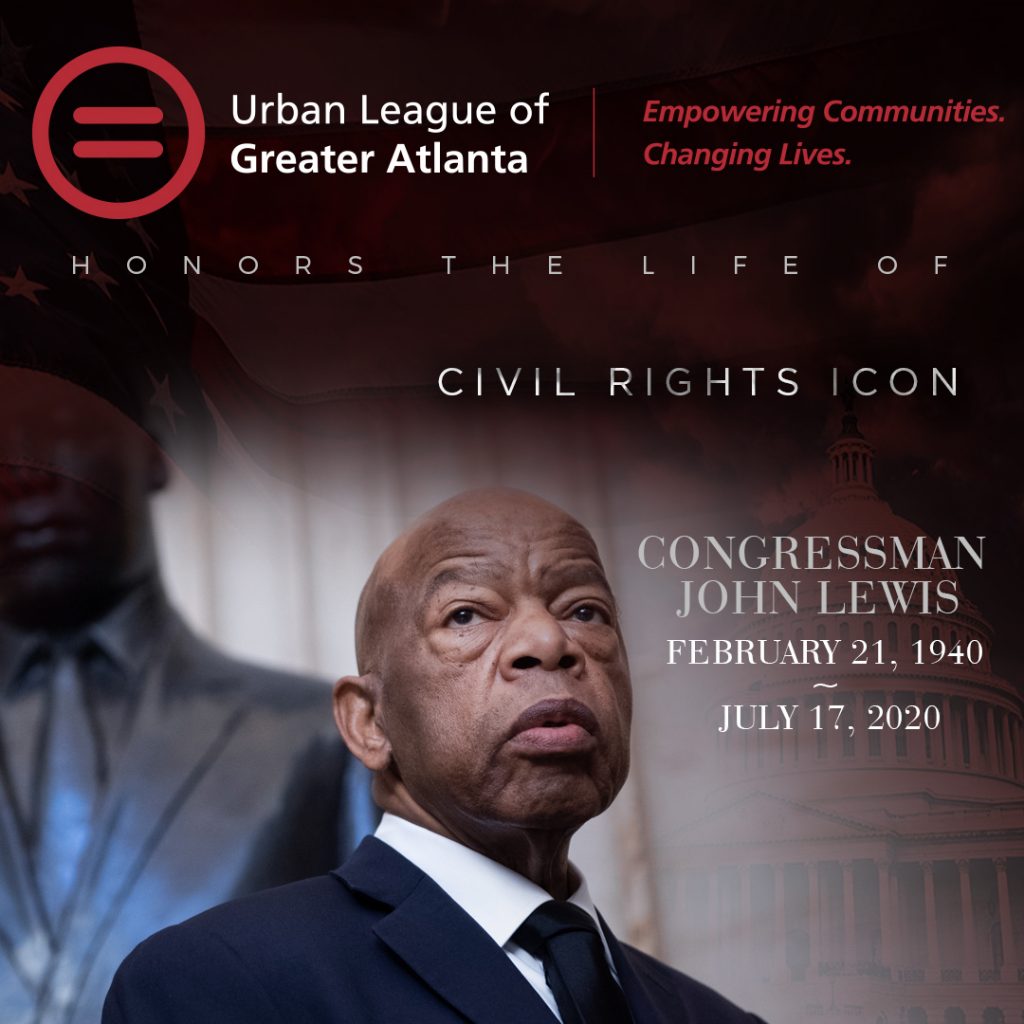 Congressman John Lewis died at home in Atlanta at age 80 on the night of July 17, 2020, leaving a profound legacy as “the living embodiment of the civil rights movement.” He was known as the “conscience of Congress,” where he served as a member of the Georgia Congressional delegation from 1986 until his death. The Urban League of Greater Atlanta extends our condolences to his family and loved ones as we mourn the loss of a great leader and friend who supported our mission throughout his tenure on Capitol Hill.

Congressman Lewis never tired of encouraging people to fight for freedom and justice. On the speaking circuit, with a Southern Baptist preacher’s cadence, he called on audiences to “Stand up, speak up, speak out,” and “Get into good trouble,” as activists for change. The last surviving speaker of the 1963 March of Washington, he had seen great sacrifice lead to victories in voting rights and other freedoms for Black Americans.

At the age of 20 in 1960, John Lewis began what would become a lifelong quest for justice and civil rights for Black people. He was one of the founders of SNCC (the Student Nonviolent Coordinating Committee), and the youngest of the nation’s civil rights leaders speaking from the stage at the March on Washington.

In 1965, he sustained major injuries when police attacked peaceful protestors in a landmark march for voting rights across the Edmund Pettus Bridge in Selma, Alabama. Television images of the attack piqued the nation’s conscience and turned the tide toward support of voting rights and the mass movement led by Dr. Martin Luther King, Jr., whom Lewis greatly admired.

On Capitol Hill, one of Congressman Lewis’s treasured legislative achievements was the passing of a bill to establish the National Museum of African American History and Culture in Washington. He had introduced the bill year after year until it passed in 2003.

When President Barack Obama gave Congressman Lewis the Presidential Medal of Freedom in 2011, he recalled the icon’s lifelong struggle for civil rights and his consistent leadership as a Congressman.

In his remarks, President Obama stated: “Generations from now, when parents teach their children what is meant by courage, the story of John Lewis will come to mind — an American who knew that change could not wait for some other person or some other time; whose life is a lesson in the fierce urgency of now.”

Congressman Lewis will always be remembered – and emulated — for his commitment to the cause of racial justice. He helped inspire us to establish a Policy and Legislative Affairs division at the League, and we were honored to give him our highest award at our Equal Opportunity Day dinner in 2013.

We will continue to honor him by getting into “good trouble” carrying on courageously as he did in the fight for civil and human rights, voting rights, and a fair and just world. 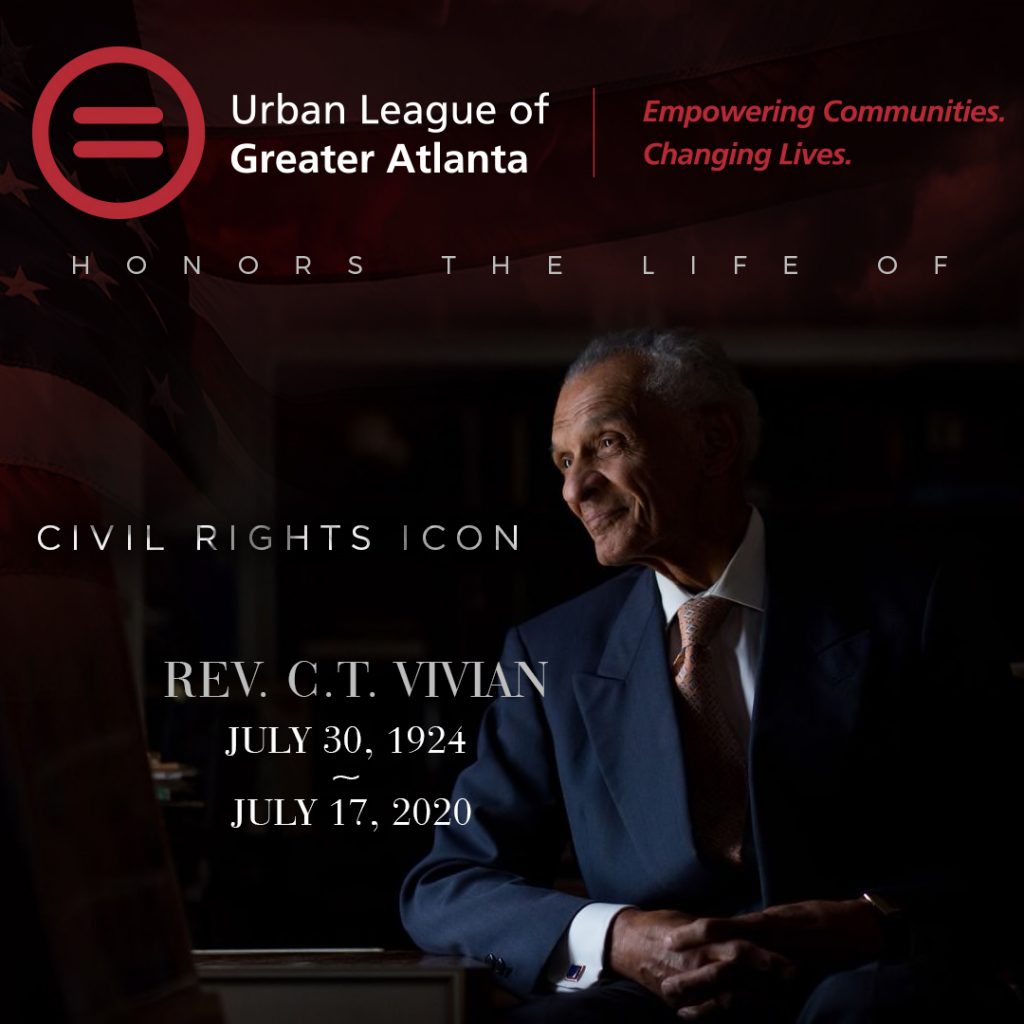 Dr. Martin Luther King Jr. called him the “greatest preacher that ever lived.” At the Urban League, we called him our stalwart friend. The world knew him as a lifelong freedom fighter who accepted the Presidential Medal of Freedom from President Barack Obama in 2013. On July 17, 2020, this extraordinary man, Rev. C.T. Vivian, died at the age of 95, in Atlanta.

Rev. Vivian always kept a ready smile, a twinkle in his eye, a witty story, and a loving heart to share with everyone he met. We will miss him greatly. We offer our condolences to his family and to everyone who loved him deeply.

Born Cordy Tindell Vivian on July 30, 1924, Rev. Vivian got involved in the movement for racial equality as a young man in 1947 when he joined a sit-in to integrate a restaurant in Illinois. One of his most widely known protests happened in Selma, Alabama, on Feb. 16, 1965, on the courthouse steps where he sought to register Black people to vote. Dr. Vivian was brutally punched in the face and knocked to the ground by Sheriff Jim Clark. By getting back up and continuing his peaceful protest, Dr. Vivian epitomized the power of the non-violent movement for civil rights.

Dr. Vivian dedicated his life to the movement for justice and racial harmony. Beyond his leadership in civil rights organizations promoting voting rights, including SNCC (Student Nonviolent Coordinating Committee) and SCLC (Southern Christian Leadership Conference), he initiated an effort to help black students go to college that became the Upward Bound program. He also continued to preach and speak before major audiences about racial justice and founded a diversity consulting firm in Atlanta.

Although he had many invitations, Rev. Vivian took time out of his incredibly busy schedule to speak to young people in ULGA’s programs designed to acquaint them with the history of the civil rights movement of the 1960s, introduce them to Atlanta icons, and to encourage them to live up to their potential. We are eternally grateful and will honor him by continuing his legacy of promoting justice and opportunity for all.