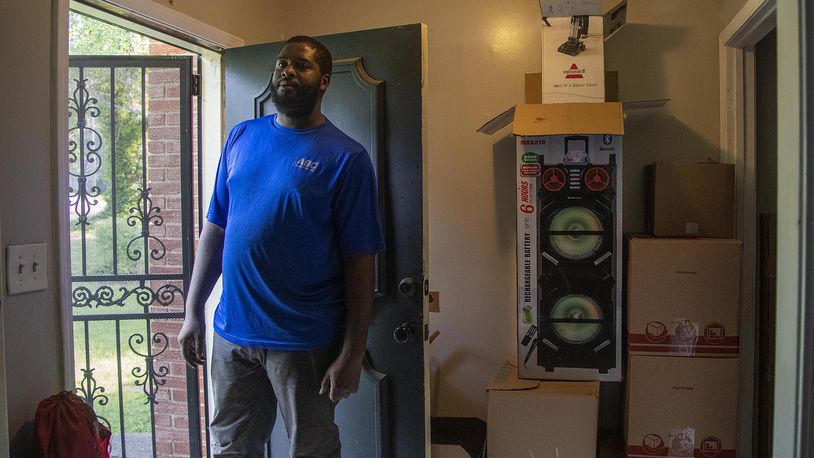 Saturday’s expiration of the national ban on evictions removes a safety net that kept millions of Americans in their homes during the pandemic — and raises the stakes for programs distributing federal aid to help renters pay back rent.

Georgia counties, cities and the state government are still working to give out millions in rent relief funds the federal government meted out in February.

But The Atlanta Journal-Constitution found that slow rollouts, cumbersome paperwork for both renters and landlords, and landlords who decline to accept payments have left government programs sitting on piles of unspent aid just as renters need it the most.

As of July 20, only about 6% of the $710 million that Georgia and select local governments received in federal aid had gone to households at risk of eviction or behind on rent, the AJC’s analysis found.

Meanwhile, the Census Bureau estimates between 159,365 and 344,035 Georgians are “very likely” or “somewhat likely” to be evicted due to lack of payment, based on survey results from June 23 to July 5. Some of those at risk are immigrants and single-parent families, local advocates say.

In metro Atlanta, up to a quarter of renting households in Clayton, Cobb, DeKalb, Fulton and Gwinnett owe back rent, according to a nationwide analysis by nonprofit health organization Surgo Ventures. The average amount owed in each of the counties ranges from about $3,400 to more than $4,000.

One of those in arrears is Joshua Elam, a 34-year-old DeKalb resident who struggled to find work during the pandemic.

Elam submitted a rental assistance application in early spring as soon as he learned that a county-run program could help him pay back rent he owed his landlord.

While his landlord initiated the eviction process, Elam battled it in court and hoped the assistance would come through. The wait turned into months and the rent balance kept growing. 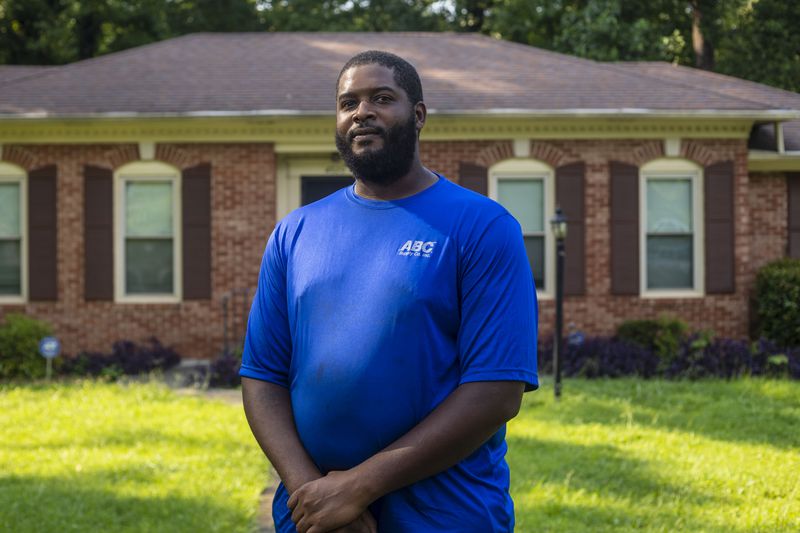 In June, he finally received a call back from DeKalb’s Tenant-Landlord Assistance Coalition: it could cover a third of the $12,000 he owed. Elam said he’d be able to provide an additional $3,000.

His landlord, though, declined to take the payments because Elam still couldn’t come up with all the money, Elam said.

“It’s been real rough, having bills overlapping and getting eviction notices,” Elam said. “Trying to find a job and going through the pandemic. It’s really even more tough.”

Twelve county and city governments received a combined $158 million and the government of Georgia received $552 million for the rest of the state from the Treasury Department’s $25 billion Emergency Rental Assistance program.

Under federal guidelines, if 65% of a program’s funds have not been used by Sept. 30, the Treasury can claw the money back and reallocate it toward more efficient programs. No Georgia jurisdiction is close to meeting that mark.

“What we’ve been seeing around the state and in metro Atlanta is that the rollout has been extremely slow,” said Bambie Hayes-Brown, CEO of Georgia Advancing Communities Together, a housing and community advocacy group. “It has been extremely cumbersome.”

While many rental assistance programs are beginning to pick up the pace of distributing aid, money for months trickled out slowly as county governments created programs, or contracted with nonprofits, that could handle an unprecedented volume of applicants and money.

“Out of all of the programs we’ve tried to implement,” DeKalb County CEO Michael Thurmond told the AJC, “rental assistance has been the most challenging.”

The Treasury established guidelines for how programs must operate, but the details can vary greatly across programs. Generally, eligible applicants must demonstrate economic hardship from the pandemic and have an annual household income at or below 80% of the area median income. Some programs allow landlords to apply on behalf of their tenant, although federal guidelines do not require that applications be open to landlords.

As of July 20, the state rental assistance program had spent only 2.4% of the money it received, or $13 million. The program, run by the Georgia Department of Community Affairs, is available to renters who don’t live in the 12 jurisdictions that received their own federal funding.

Tonya Cureton Curry, DCA’s deputy commissioner of housing, said her agency has experience administering rental assistance — “but not of this scale.”

In an emailed response to questions about hurdles that the state program has faced, Curry said state efforts have been focused in areas like Augusta, Columbus and Macon, and included ads on social media and billboards. The state program also has “a team of people dedicated to boots-on-the-ground outreach,” she said, and has sent “outreach kits” to churches and large apartment companies to help spread the word.

“One challenge,” Curry wrote, “is people think the program is too good to be true. It’s not unusual to hear people might think this way with funding coming from the government, but this program is not a scam.”

She said more outreach staff may be hired but did not directly address any other issues that might be holding back the half-a-billion-dollar program.

“One challenge, is people think the program is too good to be true. It’s not unusual to hear people might think this way with funding coming from the government, but this program is not a scam.”

Local governments have generally fared better in releasing the aid, the AJC found, though discrepancies exist across the state. Fulton County has spent 48% of the $18 million it received as of July 26, and the city of Atlanta has spent 30% of its $15 million program as of June 28.

Gwinnett County, meanwhile, received $28 million, the most of all local governments, but spent only 8% as of July 20. Cherokee County had also spent 8% of its $7.7 million by the same date.

The slow movement of aid and inconsistency between programs follows trends nationwide. Data released by the Treasury on July 2 showed that state and local governments gave out $1.5 billion of the $25 billion, or 6%, through the end of May. The department also noted significant variation in the efficiency of programs.

Treasury officials said that jurisdictions that started their programs soon after receiving funds have seen more success than those who didn’t launch until May or June. Communities that already had existing assistance programs scaled up more quickly.

Not creating a program from scratch has accounted for some of Atlanta’s relative success in distributing assistance, said Protip Biswas, senior vice president of United Way of Greater Atlanta’s Regional Commission on Homelessness, which has spearheaded the city’s effort.

United Way also did not impose many additional requirements for applicants beyond what’s mandated by federal guidelines, and it made sure dedicated staff, not those taking on additional duties, were tasked with processing applications, he said.

“Anything that we can do to prevent evictions is what we need done,” Biswas said.

Experts and advocates point to a variety of reasons why aid has taken so long to get to Georgians in need.

The existence of at least 13 separate government-run programs, each with slightly different requirements, has left some renters confused about where to even start. Burdensome paperwork and strict documentation standards for proving COVID-related hardship may be the biggest barriers.

Under most Georgia programs, applicants must provide some form of state ID; proof of income; a copy of their lease agreement; an eviction notice or proof of past due rent or utilities; and documents showing financial hardship from COVID-19.

“It’s been real rough, having bills overlapping and getting eviction notices. Trying to find a job and going through the pandemic. It’s really even more tough.”

Falecia Stewart is vice president of housing for MUST Ministries, a nonprofit which oversees Cherokee County’s rental assistance program and is one of five organizations that administer funds in Cobb County. She said producing those financial hardship documents has been difficult for many renters.

While the exact documents vary by program, many counties ask for proof of unemployment benefits during the pandemic, termination letters from an employer that reference COVID-19 or bank statements that show a reduced income. Accessing these documents can be especially difficult for low-income renters.

“A lot of individuals assume that if they’ve contracted the virus, that would be justification [for qualifying for funds], but it’s financial impact,” Stewart said. “It’s one of the biggest challenges we face and it’s just so unfortunate.” 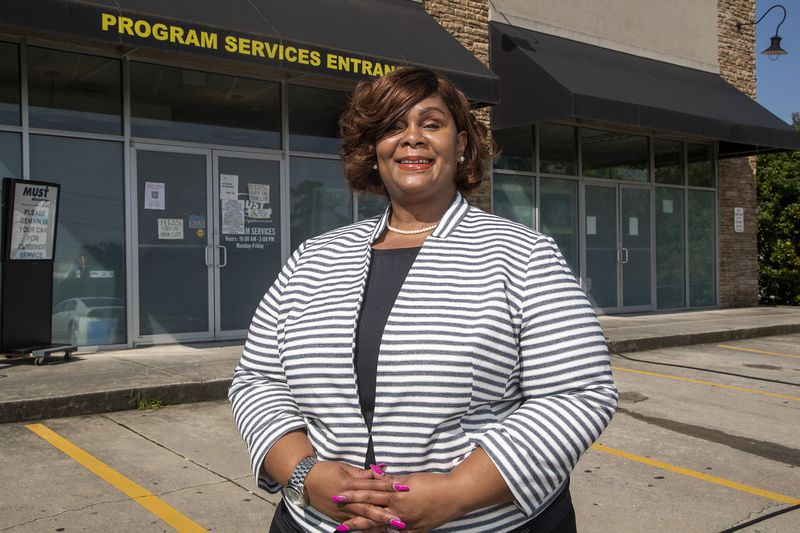 “Programs are not utilizing self-attestation and are instead requiring very burdensome documentation that in some cases, low-income tenants simply cannot produce,” Yentel said, “and then are left out of getting any of the assistance that they need.”

Currently, six of Georgia’s programs allow applicants to self-attest without other documents.

Quantina Scott, a renter in Cobb County, said her application was rejected because as a self-employed hairdresser, she had an even higher documentation burden.

“I wrote a letter that stated my last day of work, but they told me I couldn’t write my own letter,” Scott said. “Well I’m my own boss, and you want me to go ask someone else for documentation?

Housing advocates and renters say that some landlords — who wield much of the power in these situations — are also frustrating the distribution of aid.

With many programs in the state, both renters and landlords can apply for aid. But even if the application comes from the renter, landlords generally must help with documentation of what’s owed. If they choose, landlords can simply ignore relief applications from renters and overtures from the groups trying to help them, according to advocates and government officials.

A new tranche of rent relief funds on the way from the Biden administration’s American Rescue Plan will provide more flexibility and allow local governments to provide aid directly to renters.

But under this first round of funding from the Treasury, state and local program must give the funds directly to landlords or utility companies. Landlords may reject the funding, even if they receive enough money to cover the back-rent they’re owed.

In many cases, advocates said, landlords are choosing to proceed with an eviction case because they would prefer to re-rent the unit to someone with a higher or more stable income.

Hayes-Brown, the CEO of Georgia Advancing Communities Together, said Atlanta’s rocketing home prices have pushed rents up, so many tenants behind on rent would likely be priced out even if they received assistance.

“If a landlord can get, let’s say, $2,000 a month from someone who has the income and who wasn’t affected by the pandemic as opposed to someone whose income was affected and can only afford $1,000, which are you going for?” she said. “You’re going to evict that current tenant and re-rent it for $2,000 because the market calls for that.”

There are, of course, plenty of landlords who would be more than happy to get assistance.

Paxton Baety, who owns and rents three houses in southern DeKalb County, estimates he lost about 40% of his total annual income through tenants not paying rent and refusing to leave.

Baety said he applied for DeKalb’s assistance program when it first opened but never heard back — presumably because of a cyberattack that wiped out many initial requests submitted to the county. He had to get a forbearance on mortgage payments for the home he lives in.

“The system is putting us in a bind and doesn’t care,” Baety said. “That’s the frustrating part.”